I took some time off on Friday to visit the India Electronics Week (IEW). And it was a wonderful experience to meet up with a whole lot of excited, purposeful and well-meaning people. This is a small write-up about some of the people I met and some observations I made. I intend to write in detail about some of my discussions. 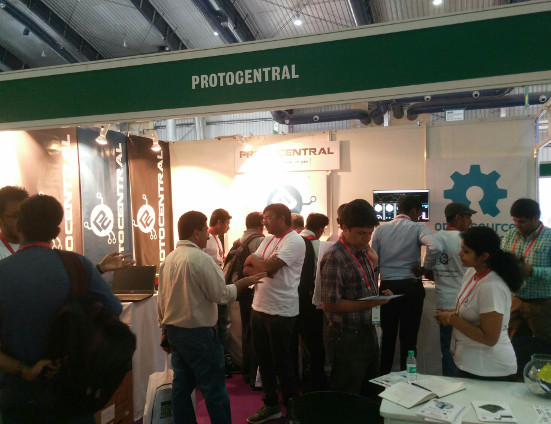 Meeting up with the ProtoCentral team was one of the goals I had while visiting the IEW. I wanted to put faces to names of people I’ve interacted with and purchased hardware from and even admired.

ProtoCentral builds a bunch of Open Source Hardware (OSHW) sensors and boards apart from also selling a variety of other hardware. I had purchased the HealthyPi board from them a few weeks back. I was extremely impressed to see such a unique board (its an ECG, respiration and SpO2 measurement board) built as open source hardware and by a firm based right here in Bangalore. They have their circuit schematics, PCB Design, firmware and a reference software implementation available for use on Github. 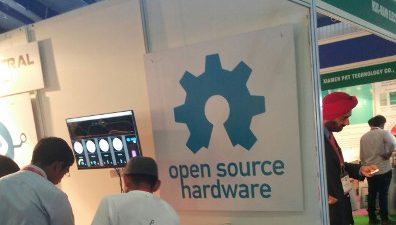 I had a very interesting discussion with the ProtoCentral founder, Ashwin Whitchurch - but more on that in a separate post. For now do check out their website and Ashwin’s presentation at OSHWA 2016.

Quite a few months back, in my infinite wisdom to acquire yet another single board computer, I participated in a Kickstarter crowdfunding campaign to acquire a unit of the Udoo x86 board. It had been touted as the most powerful single board computer (and I still think it is). And so I was pleasantly surprised to hold the piece in my hands at the SECO stall. (Udoo x86 shipments start later this month.)

SECO is an Italian company (with an office in Bangalore) that has designed the Udoo range of single board computers. (And, of course, I never knew that part of the story. Or how some of this engineering was done right here in Bangalore.) Mathan Raj Murugan, who I met at the SECO stall, was a contributor to the Linux kernel support initiative for the Udoo x86. It was a pleasure to listen to him explain about this work and have him showcase the various features of the board first hand. 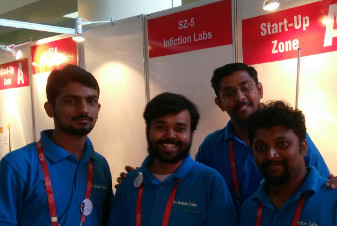 I came across Infiction Labs quite by accident while I was perusing the startups stand in Hall 2 of the exhibition. Infiction builds a wide range of hardware solutions. They have undertaken a wide range of turnkey hardware projects over the past few years that they have been in business. And now, one of the things that they do is build simple DIY robotics kits. They sell these kits to school children as a starting point for electronics experiments. What impressed me was their enthusiasm, transparency and energy.

Havish and Gurudeep spent quite some time explaining things to me and seemed very open to discussion on their design - even though most of the inputs/comments that I had for them were about things that I felt were either missing from their product or queries on why they hadn’t chosen a specific approach. 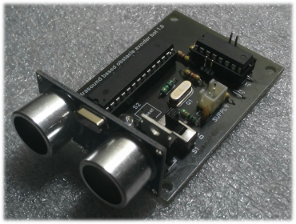 Its good that they took all the inputs in a very constructive manner and I look forward to carrying on a conversation with them in the near future. I did purchase a simple obstacle avoidance robot from them and hopefully I’ll assemble and test it out real soon.

I came across two companies that offered online training courses in the Internet of Things (IoT), “cloud” concepts and “big data”. But I came away unimpressed by their understanding of their own offerings. Their understanding of “big data” is limited to Hadoop. Their knowledge of IoT clouds was limited to what Microsoft Azure seemed to be offering. Their concept of IoT was a Raspberry Pi and Arduino kit with a set of sensors. Nevertheless, I am sure that they are helping educate people about these things in their own way. And irrespective of how impressed I might be, it is still a positive contribution towards building awareness in general. 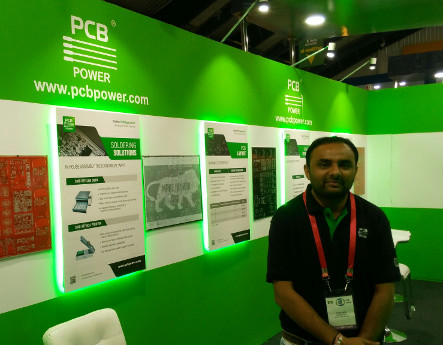 Over the past year, I had been searching for Indian companies that could help in PCB prototyping. My focus was on companies with which I could operate completely online - that is without having to personally send them an email and follow-up on my requirements… and which had a process to handle enquiries no matter what the size of the customer or the production volume. And that led me to PCB Power.

After some initial bad experiences getting them to manufacture PCBs for my personal use, I was able to successfully take their help in building production quality PCBs that I could sell. Their process for handling of orders has improved quickly and I am now able to upload PCB designs, get a quotation, make a payment and then get a confirmation about the production and delivery dates with ease. Out of all the companies I talked to and approached over the past year, PCB Power was the only one I had success with. I had some good conversations with Pavan about my experience of working with them and he was very receptive to my inputs and feedback. And did I mention that they are based in Gandhinagar, Gujarat? :)

Apart from these, I visited a variety of other companies that held my interest:

Billy Joel: The keyboard is a percussion instrument
Why is it difficult to fight against DRM?

This work is licensed under a Creative Commons Attribution-ShareAlike 4.0 International License.