The Swantantra conference on Free Software is a rather unique conference organised by ICFOSS in Trivandrum. Its unique because of the extremely rich discussion that it creates around the ideology of software freedom, rather than the technology. I was fortunate to be a part of this conference in multiple ways in December 2017. And this is a short account of the same.

The intention of the Swatantra conference is gather a variety of viewpoints centered around the core concept of software freedom. Preparations for the conference started around June 2017 when a conference committee was formed to discuss the theme, content and speakers for the conference. The theme for the 2017 edition of this conference was “Free / Open Source Software for Sustainability: Communities, Culture, Governance and Technologies”.

One of the things one finds at conferences (even conferences that are entirely about Free Software) is that because something was outsourced to someone else or because it was technologically inconvenient to use an alternative, a part of the conference operations are run using proprietary software (like it or not). So one of the things I tried to do was to find ways of avoiding this completely. This was done in two ways:

I felt that these two issues were completely behind-the-scenes sort of things that routinely get looked over and because they are generally the invisible parts of a conference, people usually think that they are “somebody else’s problem”. So what Nishant and I set out to do was to own these problems and try to solve them as elegantly and effectively as we could.

The conference backdrop being mounted behind the main stage

We landed up a day prior to the conference so that we could go to the venue in advance and get the video capture systems and wirless access points / firewall operational. (I was also carrying 3 Thinkpad X230 laptops with me flashed with coreboot and with non-Intel wireless cards that I was going to hand over to Arun and Nishant for their use. But more on that in a bit.)

ICFOSS had been kind enough to order 3 units of the Numato Opsis board and I was carrying my own unit with me as well. I had also ordered 3 long (30ft and 50ft) high speed HDMI cables and power supplies for the Opsis boards. Nishant had 3 access points with him in addition to a firewall board – all running OpenWRT customized by him specially for the conference.

Setting up the Numato Opsis Boards 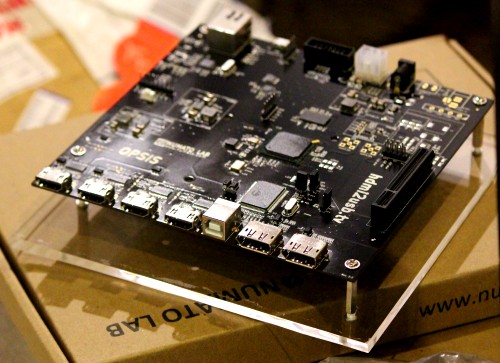 A Numato Opsis board mounted on the acrylic sheet

The first thing to do was to physically unpack the Opsis boards and mount them on 6mm thick acrylic sheets that I had cut / drilled and carried with me. Mounting the Opsis board on this acrylic sheet gave the board some weight and make it stable (so it wouldn’t get pulled by the weight of the cables) and also make it possible for someone to carry the board without having to touch the PCB. 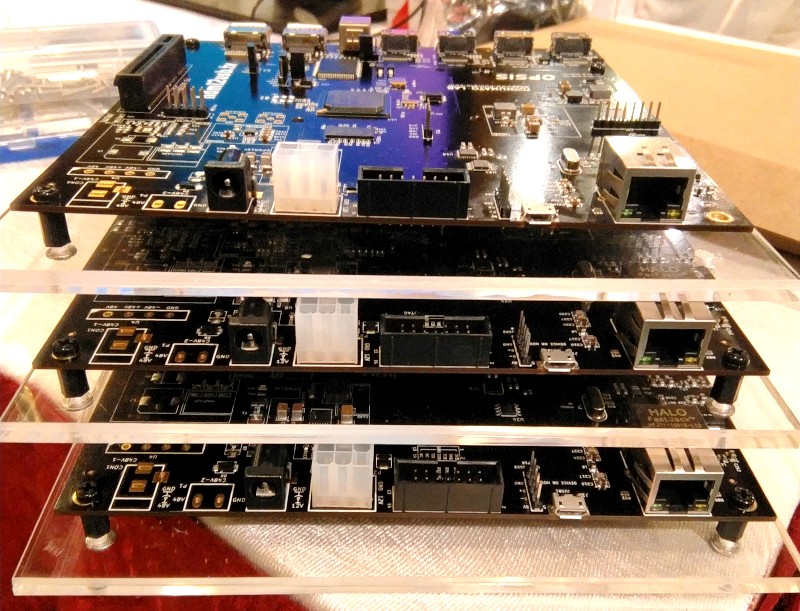 A stack of Numato Opsis boards

The next thing to do was to flash the latest hdmi2usb firmware on all the boards. By default, they come factory flashed with a rather old version of the firmware. Abhlish (from ICFOSS) has arranged for 3 desktop computers to be used for the video capture purpose with a fresh installation of Ubuntu on them. In order to flash the firmware on each of the Opsis boards, the correct set of packaged needed to be installed on one computer. 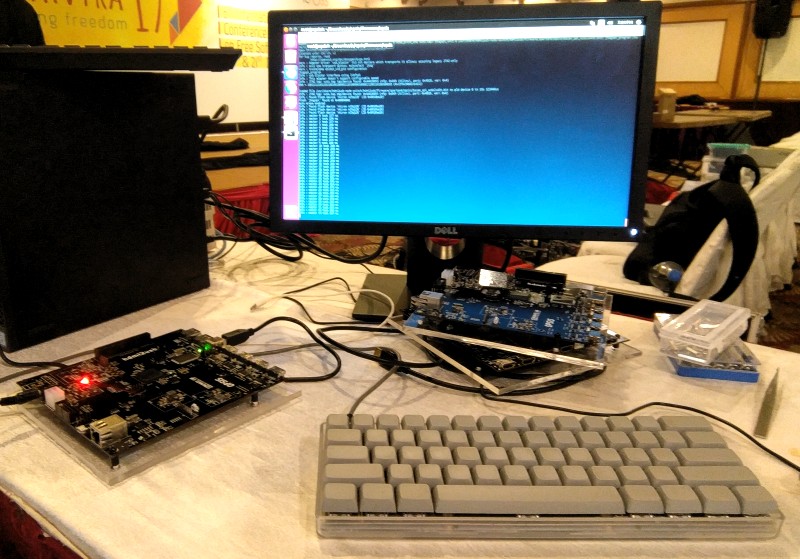 The Opsis board connects to the computer over USB and presents itself as a serial device (/dev/ttyACMx) as well as a v4l uvc video device (/dev/videox). Using a mode-switch tool, the board can be set to a special JTAG mode that will allow new firmware to be programmed onto it.

Once the boards had the latest firmware, it was time to setup the voctomix tool. Votcomix takes multiple audio and video streams and combines them as one single stream which can then be streamed live or recorded to disk. It also allows one to do live “video mixing” and tiling. When combined with scripts and documentation written by Carl Karsten, it provides an almost complete solution to record a conference’s proceedings. Since we had 4 opsis boards, the idea was to use 2 in the main auditorium and 1 each in the other smaller rooms where talks were being held. 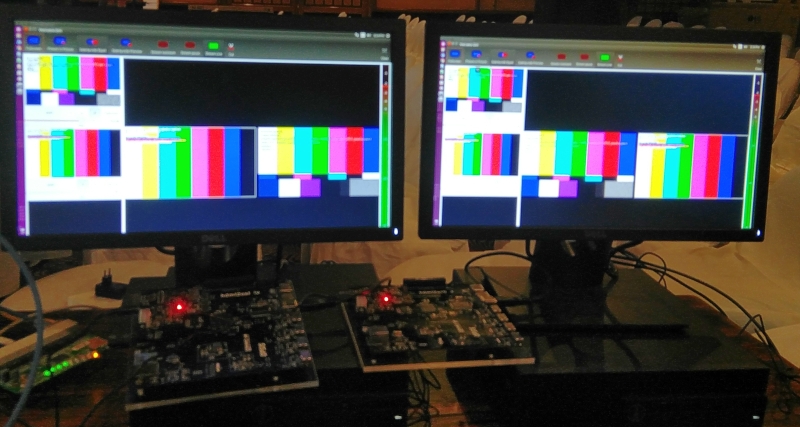 In the main auditorium, we had 2 Opsis boards connected to the computer: one to record the live video of the speaker and one to record the output of the speaker’s computer. Hence there would be two video streams that voctomix would be mixing. A current limitation of the Opsis board is that it can’t yet capture audio from HDMI. Hence, we had a composite audio output from the audio mixer to the capture computer. Theoretically, that should have enabled us to capture video with synced audio.

However, we didn’t have enough time to figure out how gstreamer was going to capture the audio capture and so the mixed video was recorded without any audio. :( 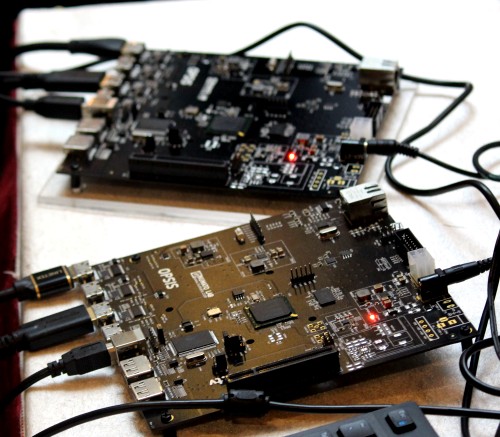 While I was trying to get the Opsis boards functional, Nishant was working on building the firewall and getting the wireless access points to work. 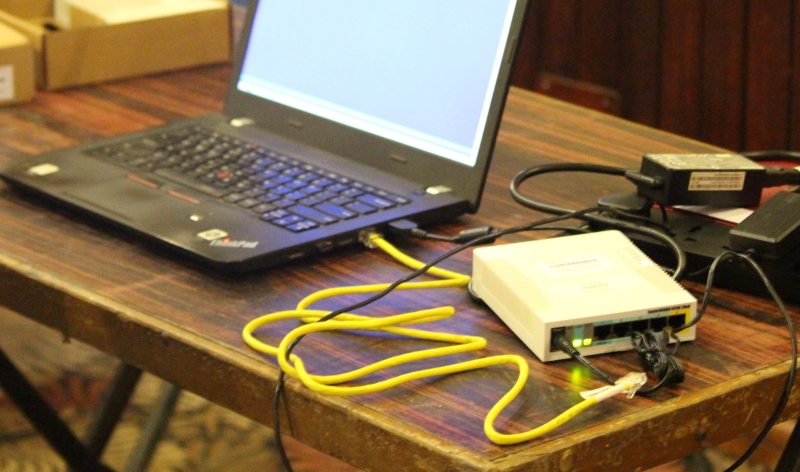 The splash screen for the captive portal 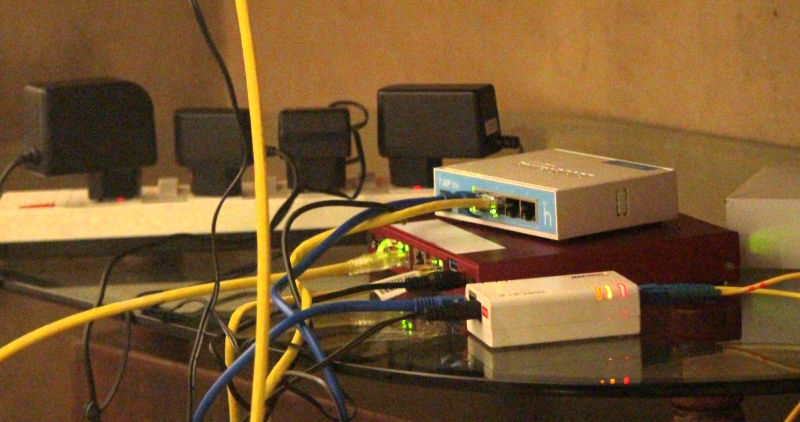 The firewall, wireless access point and fibre leased line equipment hidden behind a table outside the main auditorium

The rationale behind what Nishant built was two-fold:

Typically, using a public access point at an airport, coffee shop or hotel makes you submit to a variety of possible access controls, tracking mechanisms and other problems. At the Swatantra conference, none of this would happen.

The first day of the conference started with an extremely thought provoking talk by Karen Sandler.

This was then followed-up by the official inauguration by the Chief Minister and the IT Secretary. I had my own talk a little later on: 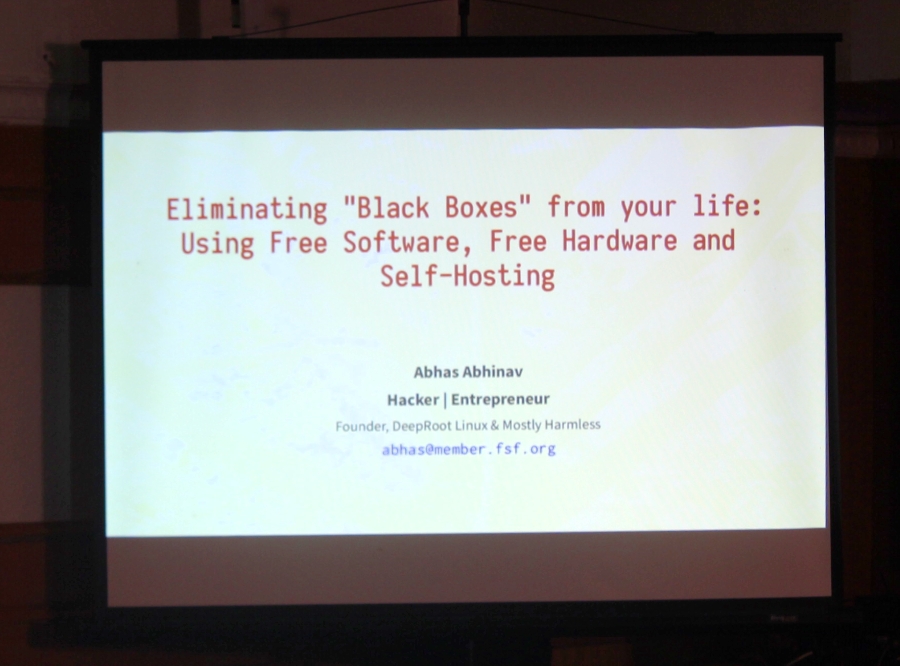 The slides for my talk being projected to the screen

Another idea that I wanted to work on about interviewing people who were a part of the free software community in various capacities. I wanted to record interviews with them to understand why they cared about software freedom, how they got started, how they lead their lives and what sort of problems they are trying to solve currently. We had access to a room where Nishant and I setup our audio equipment to record these interviews. However, we were unable to record any on the first day of the conference. 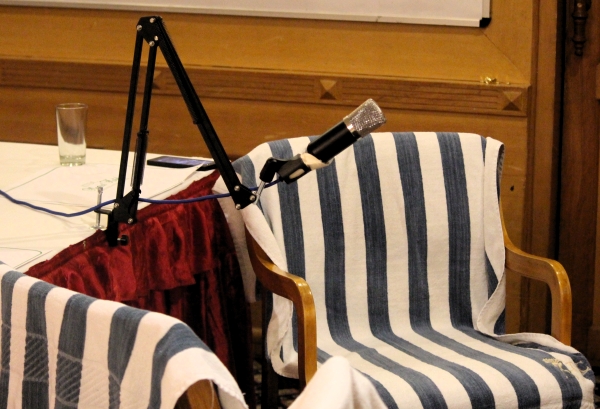 We were unable to schedule any interviews on the first day!

Finally, the day ended with a splendid concert. 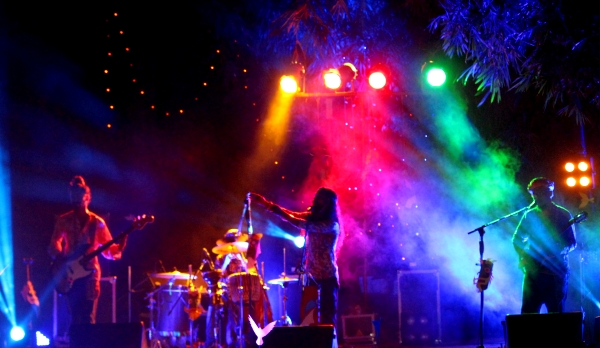 A recurring theme during the 1st day was problems with the recording setups. While there were shell scripts to encapsulate almost all commands, there were still failures. And sometimes the only way to resolve the problems (Opsis board not getting detected, for example) was to unplug everything and start all the services and scripts from scratch.

On the second day of the conference, I was actually able to attend a few talks and learn so many new things and new ways of thinking. Nishant and I were also able to record 5 interviews on the second day. Once I am able to transcribe them and clean up the audio, they will be available on the The Free Talk Show website. I am confident that there will be a lot to learn for each of us from listening to these extremely inspiring personalities who lead by example.

Nishant made his presentation on the second day: 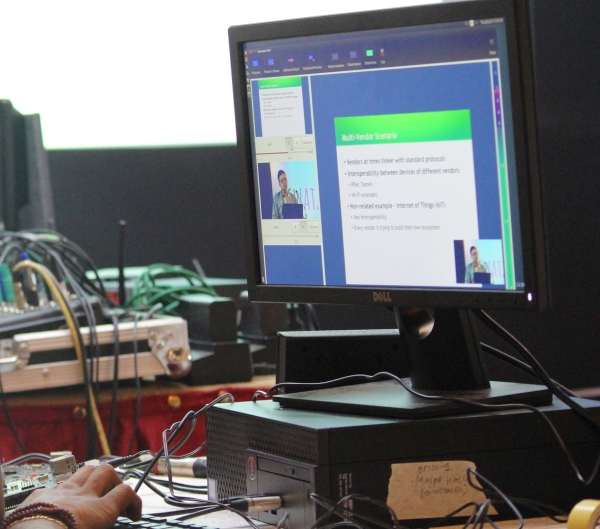 The concluding day of the conference had very interesting talks by Marco Fioretti (freeknowledge.eu), Todd Weaver (puri.sm) and Raghu Kamath (raghukamath.com) among others.

I recently realised (ie. about 4 months ago) that it is possible to purchase used X230 and X200 Thinkpad laptops are extremely low prices here in Bangalore. With these laptops, it is possible to use coreboot and libreboot (respectively) as the firmware - thereby completely eliminating the proprietary firmware that is shipped by Lenovo. Doing this not only gives you much more control over the laptop, but it also allows you to replace the Intel wireless card that the laptop ships by default (and which requires proprietary firmware to work with) and replace it with Atheros based wireless cards that work without any proprietary firmware. I got 3 such units with me for Nishant and Arun (who wanted to use them at SPACE).

Flashing coreboot onto a X230 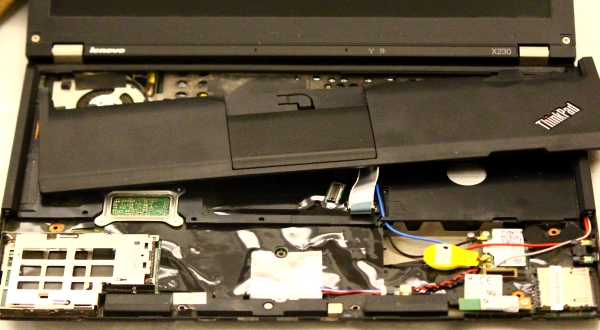 We participated in an extremely fun Christmas celebration with the entire ICFOSS team. That was an excellent conclusion to three very hectic, energising days filled with tremendous learning. 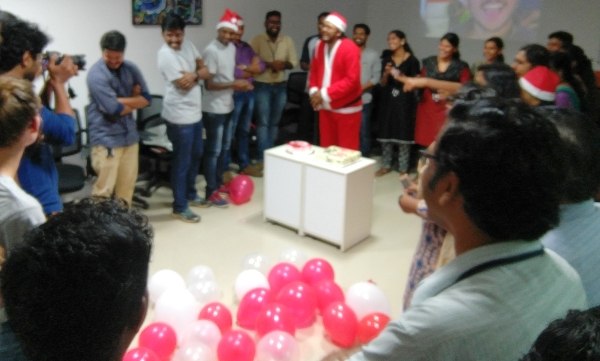 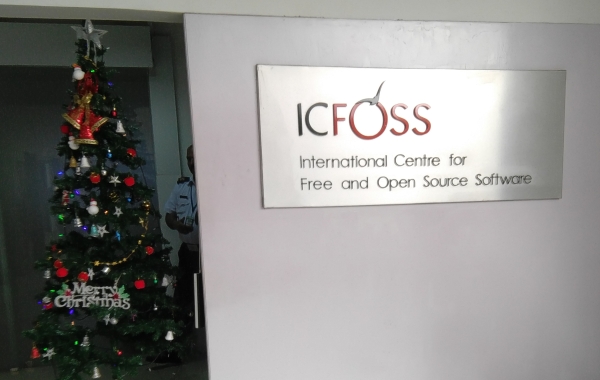 The Tyranny of Convenience
Choosing Freedom & Privacy on your Android phone

This work is licensed under a Creative Commons Attribution-ShareAlike 4.0 International License.